TENS acts with the impulse which is more powerful and longer than the nerve signal of the pain. This way, it just suppresses pain signal and pain disappears, but returns after some time. Usually pain relieving effect lasts for about 20 minutes (here we mean serious pain, such as radiculitis, kidney colic, etc). TENS does not employ biofeedback.

With this technology the restorative function of the body is amplified directly, without amplifying the pathological signal. Here we need more complicated bio-feedback’ which provide fine-tuning of the acting impulse in accordance with dynamics of the body reaction and not just in accordance with skin impedance. Diversity of the bio-feedback’ allows involving both Central Nervous System and local regenerative abilities into restorative function. Now the packets of the acting impulses (not just single impulses) are regulated with bio-feedback’ not only in accordance with dynamics of the signal (like in SCENAR) but also according to adjustment of the spectrum of the signal, to achieve maximum reaction of the CNS, and adjustment of interval dynamics of the packets of impulses, to involve local restorative mechanisms. Altogether, this process involves 46 bio-feedback’.

COSMODIC technology facilitates the ability of our body to restore itself at the cell level too. The body restores its functioning using both its general reserves (like in SCENAR) and own potential of its cells, which provides rejuvenation of the cells restoration of their normal functioning. While facilitating the ability of our body to self-restore the healthy state at the cell level, theoretically COSMODIC cannot influence the biological age of a cell, but it can help the body to use the intrinsic, laid by Nature, abilities to heal itself.

Active technologies of treatment (active SCENAR and active COSMODIC) are only yet implemented in the new professional model EX735Ag. In previous generations of devices SCENAR and COSMODIC technologies are passive. What does it mean? Every subsequent impulse is formed on the basis of analysis of body reaction to the previous acting impulse.

You can compare it to pushing the ball along the trampled down field the ball will roll where it wants into the nearest pit, for example. We can only give directions to the movement of the ball. It is the same with our body you will only recover after you push the body forward to the final destination point. That is why we need many sessions, to push the body and help it move in right direction, as it is like a ball can roll off to the side, in the direction of the nearest pit. That is the reason you cannot achieve the desired result quickly.

With the active technology, analysis of dynamics of changes of the body is based on reaction of the body upon several initial acting impulses. Knowing the dynamics, it is possible to make a forecast and make corrections into acting impulses, creating this way a future impulse. In other words, next impulses are formed not on the basis of body reaction to the previous impulse, but on the basis of extrapolation of the previous reactions.

This means, that now we are not pushing the ball, but take it in our hands and carry some distance forward, in the direction of final destination point. Sometimes we need to carry it several times from one point to another (if the ball is too heavy or we have a long way to go), sometimes we can do it one time carry the ball from point A to point B thanks to such active technology, we can achieve the desired results of treatment much quicker.

With the active technology of treatment, the next impulse is formed on the basis of extrapolation of body reaction to the several previous impulses, creating future impulse. This way we may be several steps ahead.

“COSMODIC is just a beginning” 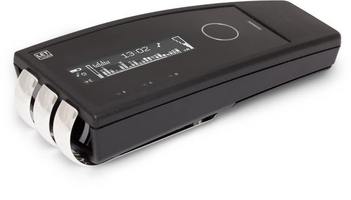